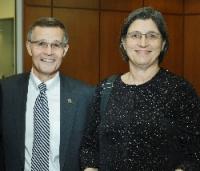 Learn more about Mr. and Mrs. Gibson and their commitment to taking part in movements that have a profound impact for all people in an article from The Imager!

Congratulations to our previous recipients: